If you would like to pick up a printed brochure that includes a map, they will be available  during the tour at the Church of the Good Shepherd, 108 East Liberty Street, York, S.C., 29745.  All sites listed below are in lovely York, SC 29745.

-> Our Church on Tour (tickets available here during the tour) 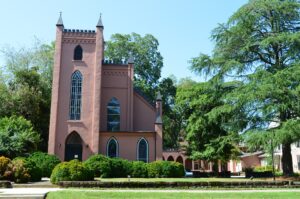 Architectural Description: This church is constructed of brick and roughcast, and features a three-story square tower with a flat roof. The façade is crenelated and is further highlighted with pinnacles topped with a cross. Pointed arches are on the vents, stained-glass windows, and hood over the front door.

History: It was not until the middle of the nineteenth century that there were enough Anglicans in York to establish an Episcopal church. Rev. John D. McCullough was sent as a missionary from Charleston, and he established churches in Spartanburg, Glen Springs, Union, and York. Beginning in 1849 services were held irregularly in the courthouse, Methodist church, and Presbyterian church. Good Shepherd was officially established in 1852, and the sanctuary was built in 1855 at a cost of about $5,000. Dr. J. M. Lowry gave a corner of his lot, and William Latta donated 500 Mexican silver dollars to be cast into the bell, which is still used. The church interior features a white marble altar, carved woodwork, and a fine pipe organ. It also features a plaque dedicated to Rev. Roberts P. Johnson, who managed to keep the church together during Reconstruction. At the time, attendees included former slaves, former slave owners, Klan leaders, Radical Republicans, Confederate veterans, and US Army soldiers assigned to enforce the federal Ku Klux Klan Acts.

-> Our Business on Tour – Sweet Tea 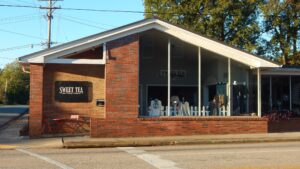 Sweet Tea Boutique is on “Liberty Street Lot 12” in the original 1786 Village Plan for Yorkville. For much of the 1800s the lot remained vacant or the location of small business shanties and storage sheds. After railroad service became available in 1852, the area was used for storage of agricultural products. From the 1880s to 1930s there were cotton platforms, cotton warehouses, cotton seed storage buildings, and firefighting hose stations.

In the 1930s Dot’s Diner was established in a small building on the lot, operated by Dot Louthian. (Her husband was the York Fire Chief, fire truck driver, city clerk, treasurer, bookkeeper, water bill collector, tax collector, business license issuer, and jailer.) In 1938 the diner building was replaced with a trolley car from the shutdown of the Charlotte streetcar system. The initial placement of the streetcar on the lot was incorrect, so elephants from the circus were used to adjust its position. 7,400-lb Big Alice was hitched to the front and another elephant pushed from the rear of the streetcar.

In 1941 Dot’s Diner closed and the lot was bought by two attorneys. They replaced the streetcar with a moderate-sized building and then sold the lot to Farmers Mutual Insurance Company (Boney Insurance) in 1942. Newly established York Electric Coop occupied the new building. The Coop was part of the U.S. government REA (Rural Electrification Act) program during the Great Depression, which supported non-profit organizations to build electrical service to farms, ranches, and rural communities. (Most cities already had electricity. Central York was electrified in 1900 and the Cannon mill village was electrified in 1908). As the Coop grew, the building was enlarged to its current size around 1958. In the 1970s York Electric Coop again expanded, moving to larger facilities on the east York bypass. 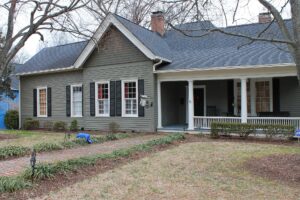 Architectural Description: This cottage has a hip roof with cross gables decorated with shingles. It is 1½ stories and features an open shed porch, an entablature above the front door, and nine-over-nine windows. Many of the home’s features, such as the marble mantels and the ship’s light on the porch, were gifts to William Gist Finley and his wife, Carey, from his brother David Edward Finley.

History: For many years William Gist Finley was solicitor of the Sixth Circuit of the General Sessions Court for South Carolina, which included York, Chester, Lancaster, and Union Counties. In York’s Heritage Willie Hall wrote that William G. and his wife, Carey (Gilbert Carey Jeter), were living here in 1937. He was an outdoorsman and loved fishing and hunting quail and foxes, and he kept a large pack of foxhounds. As solicitor he worked very hard to attempt to clear his docket every session and was often given to colorful speech. One time he was charging a wavering jury and told them that if they did not find the accused guilty, they should tear down the courthouse and plant the vacant lot in peas. 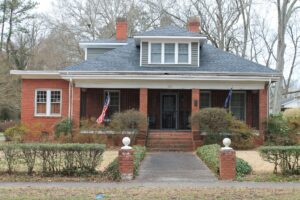 Architectural Description: This 1½-story brick house is capped by a hip roof and a hipped dormer with a ribbon window. The porch is supported by masonry columns and has no railing. Nine-over-one windows are on both sides of the glazed panel door—one on the left, two on the right. The flat-roof wing on the left has coupled nine-over-one windows. Masonry posts capped with a sphere on a base are at the end of the sidewalk near the street.

History: This house was the home of Chesley “Chess” Youngblood and his wife, Lucy Rebecca Starr Youngblood, per York’s Heritage by Willie Hall. Mr. Youngblood was the co-owner of Ferguson and Youngblood, the general store at 24 North Congress Street. He also owned a cotton farm in the Cotton Belt neighborhood. 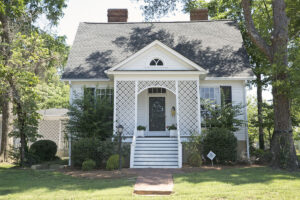 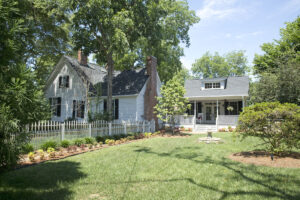 Architectural Description: This cottage has a steeply pitched, side-gabled roof and paired interior chimneys. It sits on a raised stuccoed foundation and has a large basement room with two fireplaces. Each of the front rooms has a large front and side window that are sixteen-over-twelve.

History: It is said that this house is probably one of the oldest homes in York. It is believed that the Lowry family built it in the 1830s as a cottage on the edge of town. Part of the house may have been constructed before the 1830s. Legend has it that the house was used as a refuge for people fleeing Charleston during the siege of 1862. There is a secret trapdoor leading to the basement. The porch is a circa 1880s addition. The house was named “the Lilacs” for the extensive flower gardens that surrounded the property. At that time it was occupied by Mr. and Mrs. C. R. Gillam, who bought the property in the late 1930s. Willie Hall stated in York’s Heritage that he remembered the Gillams lived here around 1937, Mr. Gillam worked for the York Depository, and Mrs. Gillam taught school. Major restoration was by Steve McCrae. The second floor was finished as living space in the 1970s. The old picket fence was replaced with a carefully copied replica. Hazel and Murray Somerville continued restoration in 2012 by refurbishing and reproducing the original basement mantle pieces, restoring the chimneys, restoring the basement as living space, adding a garage, and adding an organ house. The Somervilles, both musicians, equipped the cottage with a chamber organ, a 2-manual practice organ, and a harpsichord. 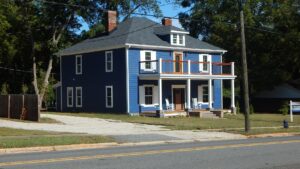 Architectural Description: The large pyramidal roof, modest overhang, two rooms wide by two rooms deep (massed plan), and simple one-over-one windows are key features of Folk architecture. The nearly full-width porch wraps to the right. At the center of the roof is a hipped dormer with louvered coupled windows. The dormer, porch columns on masonry piers, and solid masonry railing are Prairie features. The front door has a simple cornice and sidelights.

History: Willie Hall referred to this house as the Ferguson house in York’s Heritage. Around 1937 the widow of W. W. Ferguson lived here along with her son Tracy; his wife, Jeanette; and their children, Ann, Tracy Jr., and Patsy. Mrs. Ferguson was known for cleaning her house from top to bottom every spring. One of her cleaning rituals was to stuff her fireplace with newspapers and set it on fire to burn out the chimney. She would then go outside and watch the blaze roar about three feet above the chimney. Mr. Boney, owner of the insurance agency, and Slim Louthian, the fire chief, breathed a sigh of relief when the ritual was over. 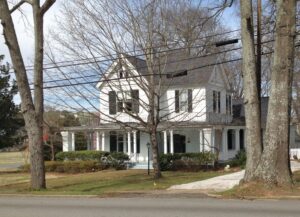 Architectural Description: This asymmetric 2½-story house has a hip roof with cross gables. The gables are accented with vergeboards, stained-glass windows, a decorative band, and dentils. The house also has a patterned masonry chimney and a cutaway bay window. Both Ionic and brick columns support the one-story hip-roof porch.

History: Colonel W. W. Lewis, who was a lawyer, built this house. His wife, Frances, rented to boarders after her husband’s death and often played the piano for her boarders. In the 1930s and 1940s the Barnett Brothers Circus winter quarters were one block away, down today’s Trinity Street. York’s Willie Hall wrote that he boarded here during that period and often heard lions roar during the night. In 1991 R. M. Inman II bought the house from the Lewises’ daughter Frances. She had continued to live in the house and died at the age of 96 in 1993. The house began life as a spindlework Queen Anne and was later simplified into a free classic Queen Anne, with original vergeboards and dentils surviving its conversion. Numerous owners have made major contributions to the restoration and preservation of this house, including R. M. Inman II, Nancy and Peter Cumbie, Cyndi Dandridge and Patrick Dandridge.

Monkeys and baboon on the loose: Not only could the roars of lions and tigers be heard, but residents recalled monkeys getting loose and spending time in the trees on Liberty and Jefferson Streets. The trainers just waited for the monkeys to return to the circus lot behind Trinity United Methodist Church when they were ready for mealtime.[i] But there was one time that was not so pleasant. When it went on tour, the circus left behind two temperamental monkeys, and they escaped their cage. They appeared at nearby houses, scratching at screen doors, entering where they could, and frightening children as well as adults. Policemen, men with pitchforks and rakes, and boys with sticks joined in a monkey hunt. After the monkeys were captured, one required treatment for a leg wound from the business end of a shotgun.[ii]

There was also a baboon escape. His name was Jacko, and he was cantankerous. He escaped from his cage and ran down the street. He frightened a driver when he jumped onto the car’s hood. (Imagine a baboon with bared fangs suddenly facing you through your windshield.) Jacko startled a field worker before finally disappearing altogether. He was never found.